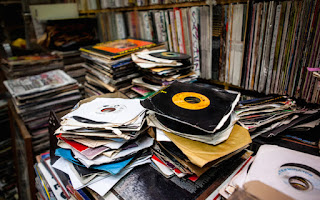 I can't believe it's almost the end of another year. There was a lot of great music this year including some stellar songs. I don't have a requirement that a song be an official single from an album. As such, you are going to see a lot of deep album cuts on this list, as well as a lot of one-off's that aren't even off an album at all. With that said, let's get to it:

This album came out way at the beginning of the year, and remained in heavy rotation for most of it. I love this driving, funky track filled with luscious piano rolls.

Simple and sweet. This song hit all the right indie pop buttons for me.

Although she appears unhurried in getting another full length out, Annie at least keeps us teased with a slew of EPs. From the Endless Vacation EP, "WorkX2" is a frothy dance track that she does effortlessly.

Young Galaxy never phones it in. Their new record Falsework is another impeccable slice of arty-pop. "Body" shows them throwing down squarely on the dance floor and taking no prisoners.

Tamaryn has moved from their deep shoegaze roots into a new period of exquisitely rendered dream pop, touching on late period Cocteau Twins for inspiration.

Loopy synth-pop track from Metric that always kept evolving during its run time, finishing off with an epic synth meltdown.

I'll's have taken Kid A as a launching point and are making some for the most paranoid, creepy, yet somehow humane tech-pop. "Let Me Have Just One" aches with emotion even though it is wrapped in some of the coldest instrumentation.

Even when FKA twigs throws together something relatively straightforward, there is an underlying tension that keeps one on edge. This is one gorgeous track, but you always feel like it might descend into madness.

This is just one of those songs that make you want to get into a convertible, put the top down, hit the open road, and blast the music as loud as you can.

You will either love or hate Everything Everything. There is no getting around the fact that they are pretty weird. I happen to like weird. This is pretty darn weird. And it's awesome.
Posted by Russell Beets at 10:09 AM