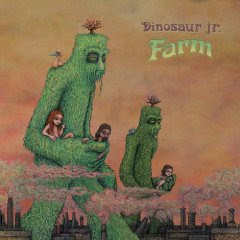 Many bands over the years have broken up for various reasons, some pleasantly, others acrimoniously. Dinosaur Jr. had one of indie rocks major bad breakups. Fronted by guitarist J. Mascis and supported by Lou Barlow on bass and Murph on drums, Dinosaur Jr.'s early releases were classics of the indie rock genre, channeling a potent mixture of Neil Young-like strong song writing and blistering Sonic Youth-like guitar squall, all topped with the laconically laid back vocals of Mascis. After two deservedly labeled masterpieces, You're Living All Over Me and Bug, Mascis and Barlow were barely speaking and Mascis told Barlow he was breaking the band up, then the following the day, reforming without Barlow. Dinosaur Jr.'s 90s output was respectable but lacked the spark that made its 80s releases so special.

Fast forward to 2005, and Mascis, in anticipation of the reissue of Dinosaur Jr.'s first three cds, announced the original lineup with Barlow, would reform and tour in support of the releases. Even more shocking was the announcement in 2007 that the original lineup would release a brand new release, the amazing Beyond. It was a natural progression from their early incarnation and stands toe to toe with those classic cds. Now their latest cd Farm has been released and amazingly there is no loss in quality and again is another classic.

First single "Over It" is classic Dinosaur Jr. Slacker melody over squonky guitars. The video is one of the most feel good videos you will see this year, showing a good amount of camaraderie between the band members:

Mascis' song writing and guitar playing is sturdy throughout. I have never been a huge fan of guitar solos, but Mascis uses them not as a way to show of his technique but more to add texture and emotion to the underlying mood of the song. This is really shown in two of the standout tracks, "Said The People" and "I Don't Wanna Go There." The latter song has an almost 4 minute solo at the end that is just achingly brilliant.

There is a nice mix of songs on the cd, from the pure rock of "Pieces" and "There's No Here," delightful pop of "Over It" and "See You" to moodier numbers like "Oceans in the Way" and one of my favorite songs, the Barlow penned number "Your Weather."

While Farm lacks Beyond's shock of being so brilliant, it really is a stronger release lyrically and musically. Time will tell if Mascis and Barlow will be able to maintain their friendship long enough to continue touring and making great music. I believe the next cd, should there be one, will not have the razor eyed view that Farm has been given, and will be taken on its merits as merely another great cd to put in the Dinosaur Jr. canon.
Posted by Russell Beets at 9:24 PM No comments: Links to this post

Videos of the Week

Yes, I know. I have been very lax lately with posting on here. I have been working two jobs and one of them does not allow us access to the Internet on our computers so it is hard to post from there. Also, I have been having lots of kidney stone issues, and have not really been up to blogging at all. I will be better, I promise. I have a lot of great new cds to review, so look out for them this week. I'll be looking at Patrick Wolf, Dinosaur Jr., and Bibio.

Here are the latest videos I have been watching:

New single from dance music legends Basement Jaxx. It is a wonderful summery dance song with a trippy video.

Typical heavy Mastodon song. Which means it is awesome!

New video for the single "Peace" by Depeche Mode. Interesting video showing the difficulties of returning to normal life after military combat.

Fun and goofy video. Just makes you want to shimmy and shake.

Ok, I will be the first to admit that I do not generally like Animal Collective. I just don't "get" them. But for some reason this song sticks in my head. Maybe it was the odd performance of it on Letterman. Or perhaps this video that is seriously weird.

Zaftig lesbian singer, check. Gold glitter and glam, check. Four to the floor backbeat, check. Yep, The Gossip are back.

This song is seriously batshit. His flow is so fast it hurts your brain. The video is seriously messed up as well.

The original lineup of Blur has reunited for a tour this summer with a returning Graham Coxon to lead guitar. They did a pre-tour warmup at Rough Trade records and here is a live video of one of their classic singles "Popscene."

One of the highlights off Fever Ray's debut, "Triangle Walks" has an accompanying video that is typically icy and cold. It is amazing to see an artist that is so committed to a certain vision. This video forms an interesting triptych with the videos for the other singles.

This is one of my favorite songs from St. Etienne. And of course I have a total crush on Sarah Cracknell.

This is the new band formed from the ashes of McClusky. This is not my favorite song off their new cd, but it is a good one. I am just waiting for the video for the song "You Need Satan More Than He Needs You."

Fun new song from Simian Mobile Disco. There is something salaciously sexy about the video.

RiRi didn't have to testify at her ex-bf's hearing this week. The asshole woman beater copped a plea. He is scum. Here is a video showing how awesome RiRi is. Better yet, it is mash up performance with Klaxon's song "Golden Skans." Glorious!

One of the greatest videos ever made, among so many great Radiohead videos. I love how they only let you in on only so much information. Let's you come up with your own conclusion as to the ending.

Another reformed original lineup, this one from an even more acrimonious split. From their amazing new cd Farm, this is the single "Over It" with a very rad video.

I absolutely adore Meryl Streep and Amy Adams. This is the trailer for their new movie Julie and Julia. It looks hysterical. I am SO there opening night!

Last but certainly not least, here is one of the funniest commercials I have ever seen. A gay ad for Travelocity UK. I about peed my pants after seeing it. This video would NEVER play in the States.
Posted by Russell Beets at 4:38 PM No comments: Links to this post

Videos of the Week

Here are some videos that caught my attention this week:


The Fly - Twilight Sad `Made To Disappear` FlyTV In The Courtyard on MUZU.

Acoustic live performance from two members of Scottish band Twilight Sad. This is a new song from their upcoming cd. Where their usual electric performances are full of squalling guitars, this shows how beautiful their music really is. The singer's Scottish brogue is particularly touching.

Grizzly Bear is my favorite band of the moment as attested to by my 10 out of 10 review of their latest cd Veckatimest. Here is a live performance of their single "Two Weeks." It is such a gorgeous song.

Bat for Lashes new video for "Pearl's Dream." Great song but a rather strange video.

Live performance from Robyn on Letterman for the song "Cobrastyle." Interesting, dadaesque performance. Love the bear heads. What is my obsession with bears these days?

David Byrne and Brian Eno released a very low-key cd last year that turned out to be one of the most captivating cd's I heard all year. "Strange Overtones" was in my top ten singles of the year. It is a veru infectious song with a killer melody and chorus. This is a live performance from David Byrne.

Another Grizzly Bear live performance. This is for my favorite song of theirs "Fine For Now." Haunting.

New single from one of fave bands The Church. Gorgeous song.

This is such a sad song and even sadder video. I am really not a downer of a person, but I tend to enjoy music that is on the side of minor chords. The ending of this video is very poignant.

Funky dayglo painted video from flamboyant artiste Patrick Wolf. New single for "Hard Times" from his fantastic new cd The Bachelor.
Posted by Russell Beets at 8:29 PM No comments: Links to this post