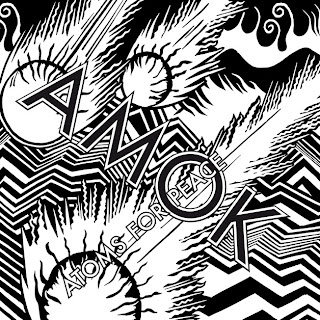 Perhaps to provide less of a microscopic focus on his work with Radiohead, Thom Yorke released The Eraser back in 2006. Featuring minimal, glitchy electronic tracks, the album was a chilly experience, but one that with some patience yielded a fulfilling experience. I was fortunate to see Yorke and a backing band featuring Nigel Godrich, Red Hot Chili Peppers bassist Flea, David Byrne percussionist Mauro Refosco, and drummer Joey Waronker perform more fully realized versions of these tracks at Coachella in 2010. In a live setting the tracks became less insular and more alive. Now as a fully formed "band," Atoms For Peace releases its debut record Amok which I assumed, based on the interaction with the live band members, would be a more meaty experience. Strangely, the tracks really don't sound that much different from The Eraser, still minimal, edgy, and chilly, but fleshed out with some intricate basswork from Flea and more "real" percussion. It is a testament to Yorke's vision that the fact that the songs don't sound fuller and more robust is not necessarily a drawback. This project is not meant to be Radiohead, and seldom feels like a Radiohead derivative. I am sure in a live setting, these tracks will sound completely different, but for the album itself, it is obviously Yorke's choice to still create an atmosphere of claustrophobia and dread, which fits the project to a T, even down to the stark, black and white album artwork.

Yorke has stated that he immersed himself in the afropop of Fela Kuti for this record, and there is a decided focus on more complex and skittering rhythms this go around, however, Waronker and Refosco seem slightly incidental to the drum programming that Yorke and Godrich laid down as a base. Off the bat, "Before Your Eyes" begins warmly with more traditional percussive elements, scraping guitar trills, subtle fretwork from Flea, and Yorke's haunting voice developing into a gorgeous opening that gets more and more under your skin as it progresses. "Default" trades that warmth for an icy electronic haze, the void filled with tense electronics and ping-ponging percussion burbling underneath.

This icy sheen permeates the record, with only some analog synthesizers added to the mix to slightly defrost the chill. The clattering, percussion and gloomy keyboards of "Ingenue" are blessed with a undercurrent of analog drones and slippery keyboard runs. "Unless" transcends its Italian horror film beginnings to phase slowly into a shimmering web of glistening keyboards and muted programming. And closing/title track "Amok" features insistent keyboards that caress Yorke's aching vocals along, a ghostly chorus of moans adding heft and weight.

Perhaps the only real glaring problem with the record is the seeming under use of Flea on bass. For the majority of the record his work is relatively quiet and unobtrusive, rarely poking its head into the mix. Only on a few occasions do his melodic lines make their presence known. "Dropped" adds a forceful bassline to a minimalist electronic bed and pushes the song to new heights, creating much needed urgency. On "Judge Jury and Executioner," Flea's bass is a slinky, serpentine creature weaving in and out of the stuttering percussion and gentle acoustic guitars.

While overall I thought the record held a nice, consistent mood throughout, there were times where Yorke and Co. were content to lean more on atmosphere than actual songs. "Reverse Running," despite a lovely Yorke vocal, meanders over a slurred bass line and repetitive guitar/drum loops, and the lovely synth coda to "Stuck Together Pices" is not enough to salvage the track from a similar trajectory. Amok is a puzzling album in that it is almost exactly what you think it would be, but yet is still far from being what you want it to be. It hovers around just good, never descending into anything embarrassing, but never quite lifting off into great territory. It is a tantalizing morsel that, while whetting one's appetite, is just not filling enough.

Woof Daddy: excellent; just a hair away from being a masterpiece.

Grrrr: very good; will definitely be considered for my top releases of the year.

Meh: not horrible, but certainly not great; could have either been polished, trimmed, or re-thought.

Jeez Lady: what the hell happened? Just plain bad. They should hang their heads in shame and be forced to listen to Lady Gaga ad nauseam as penance.

Tragicistani: so bad, armed villagers with pitchforks and torches should run the artist out of the country for inflicting this abomination on the human race.
Posted by Russell Beets at 10:51 AM