The Pains Of Being Pure Of Heart 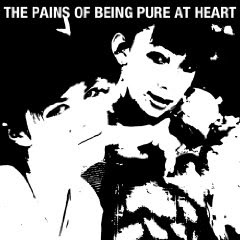 Do we generally get trapped in patterns of things we like, never to venture forth to try something new? I tend to like the same food, same movies, hell, even similar men. With music, however, I find that this is my worst trait. If I ever see a album review that mentions the term "shoegaze" I will most likely at least check the band out on iTunes or MySpace in order to get a feel for them. This does not mean that only seek this type of music out. I would like to think that this is my "comfort" music. There is just something about guitars turned up to 10 and processed through a million effects pedals that just makes me feel warm and cozy.

So I was very interested in the initial cd from the band The Pains of Being Pure of Heart. It has been getting warm and glowing reviews from the likes of Pitchfork and Cokemachineglow, with of course the requisite mentions of being reminiscent of My Bloody Valentine/Jesus and Mary Chain/Ride/Lush, et al. And yes, they utilize the same hazy, feedback drenched guitars, echoey drums, and dreamy otherworldy vocals. But there is something more that keeps it from being merely a pastiche.

PBPH are not using the effect pedals to mask a lack of proficiency in their playing, to cloud over juvenile lyrics, or even to just jump on a trendy bandwagon. The hazy music serves as a counterpoint to the lyrics, to show that not everything can be taken at face value, that there are always hidden depths. The music itself is very sunny and propulsive and dare I say toe-tapping. And you find yourself smiling and in a good mood. Then you start paying attention to the lyrics and it smacks you in the head that there is more going on here than meets the eye. Underneath the winsome exterior is a very dark heart.

The jangly Smiths meets MBV song "This Love Is Fucking Right!" seems like a bright Spring-like song you'd play with the top down rolling through the countryside. Of course, it also has lyrics such as:

"In a dark room I can see you shining bright
You don't have to tell me twice, it's alright
In a dark room we can do just what we like
You're my sister, and this love is fucking right."

Which of course can literally be interpreted about being incest, or perhaps, more imaginatively, a first lesbian/gay affair or any kind of new love. After this song, you really find yourself listening more attentively, and finding that most of the lyrics have some sort of sinister or secret bent to them.

The song "Teenager In Love" has a sprightly, 50s girl group swagger to it, with propulsive drums and twinkly keyboards, and the disturbing lyric:

"And if you made a stand,
I'd stand with you til the end
But you don't need a friend
When you're a teenager in love with christ and heroin.

In "Young Adult Friction" the narrator is a student who is the rebound guy for a girl dumped by her boyfriend who trysts in the empty library:

"Between the stacks in the library
Not like anyone stopped to see
We came they went, our bodies spent
Among the dust and the microfiche"

When she gets out of her funk of losing her boyfriend she dumps the poor guy:

"Now that you feel, you say its not real."

The narrators always seem to be trapped in situations they cannot extracate themselves from. In "The Tenure Itch" a student having an affair with her professor knows that it is wrong, but he has some sort of pull over him/her and though it pains them, they stick with the relationship:

"He makes corrections, you shut the blinds
You're talking less and less,but the words aren't hard to find
His last suggestion, it makes you ill,
Still one more lesson leaves you twisting to his will."

This is not to say that the entire album is full of these types of juxtapositions. Sometimes the lyrics are as sunny as the music itself. For instance, "Come Saturday" details a long distance relationship and the joy of having the person visit.

But the majority of the songs have a bit of a bite to them; the sour with the sweet. Which I am told is a lot like my personality. So I guess it is fitting that I am drawn to this type of record. This album will not change your life in anyway, but it has moments of lyrical brilliance. Another band that comes to mind is Belle and Sebastian. Well, a less twee version; their distant cousins who are prone to sitting in dark rooms, smoking pot, and turning the effects pedals on stun.
Posted by Russell Beets at 5:41 AM

Russell Beets
San Francisco, CA, United States
I'm a life-long music geek who enjoys sharing my passion for music. The majority of my blog-posts are music reviews, with an occasional odd ball post here and there. I hope you enjoy reading my reviews. Follow me on Twitter at @MBWSTMusic